Literature / The Lotterys Plus One 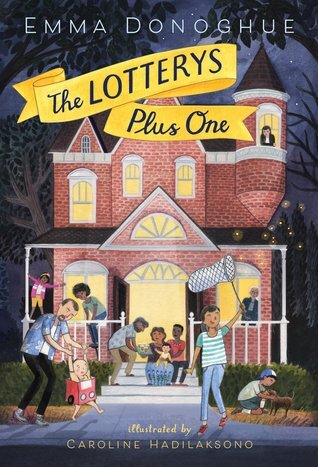 The Lotterys Plus One is a Middle Graders novel by Emma Donoghue.

The Lotterys are not your average family. Far from it, perhaps. With two gay dads (PapaDum and PopCorn), two gay moms (CardaMum and MaxiMum), and seven children (biological and adopted) (Sic, Catalpa, Wood, Aspen, Sumac, Brian (real name Briar), and Oak), they are not the kind of people you would casually run into... unless you live in Toronto, Ontario, Canada. After the family won the lottery one day, they decided to change their names accordingly, and bought a big old house in which to live, which they have dubbed the "Camelottery".

Well, now, their family's getting a little bigger. PopCorn has just gotten word that his father, Iain Miller, is showing signs of dementia after having gotten burned in his house (he managed to put the fire out before it could spread). As a result, Iain is going to be living with the Lotterys for a while.

And boy, is it gonna be a long visit. He's grumpy, grouchy, doesn't say much, and doesn't think much of the family or their ways. Plus, he's been moved into the bedroom of the Lotterys' middle child, Sumac, who had to move up to the spare room, which she is NOT happy about. But still, Iain is family, so the Lotterys will do all they can to accommodate him.

The book was published on March 28th, 2017. The book has a sequel, The Lotterys More or Less.

The Lotterys Plus One contains examples of: