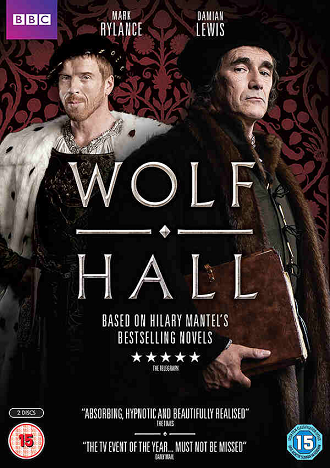 Those who have been made can be unmade.
Advertisement:

Hilary Mantel's 2009 novel Wolf Hall was adapted for television by Peter Straughan, and first broadcast on BBC 2 in the UK in January 2015. It stars Mark Rylance as Thomas Cromwell, Damian Lewis as Henry VIII, Claire Foy as Anne Boleyn, and Bernard Hill as the Duke of Norfolk. Covering both the eponymous novel and its 2012 sequel, Bring Up the Bodies, the series is quite faithful to the books.

This is the familiar story of Henry VIII and Anne Boleyn from the point-of-view of his closest adviser, Thomas Cromwell. It rehabilitates the character of Cromwell—rather than an amoral schemer, the Cromwell of Wolf Hall is a man with true depth of feeling and principles. His rise from abused blacksmith's boy to the king's right hand is not shown as evil but a well-earned and admirable achievement. It also paints a dimmer view of some of Cromwell's adversaries, particularly Thomas More—ultimately, however, it does not shy away from Cromwell's unscrupulous role in Anne's fatal downfall.

Series 2, covering the final book, was confirmed to be in production on 27th May, 2019.