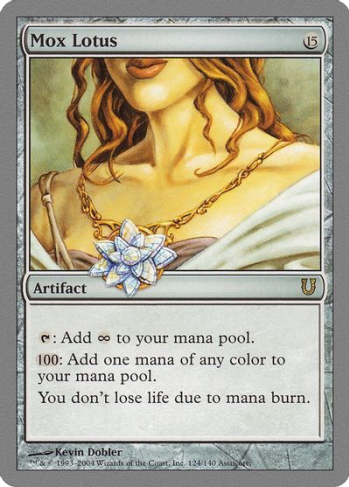 This card isn't legal. But it's hard to believe what it's

ever was.
August: Goblin Lackey

are banned in Extended. "What about Grim Monolith

?" asks a bystander. "Isn't Mirrodin supposed to be the all-artifact set?" "Meh," says R&D. "How bad could it be?" (...)
October: Pro Tour: Tinker is held in Tinker Orleans. Tinker Mindslaver

Being the first trading card game, Magic: The Gathering has had a lot of Game Breakers.

The most famous of these are the Power Nine, from Limited Edition, Magic's original game-breakers. Having been around since the start, these are the most famously broken cards; this is mainly due to having been created before it was totally figured out what was broken and what wasn't. These are banned in every format except Vintage, where they're restricted to one per deck.

But there are far more. Bear in mind notes regarding bans and restrictions; Wizards have taken a far more liberal stance on these, and many cards that were once restricted or even banned entirely have had their rulings relaxed from their previous status. In addition, most card errata that radically change a card's function (eg those formerly in place for Great Whale and Time Vault) have been removed in favour of simply clarifying the rules actually on the card.

One might also wonder how so many of these breakers make it past playtesting. While it is true that each card is subjected to rigorous testing and revisions (in some cases hundreds of hours per card) prior to release, the simple fact is that the play design team is massively outnumbered by the millions of Magic players around the globe; particularly with the advent of digital platforms such as Magic Online and Magic Arena, these cards see more play on the day they're released than they did during their entire one to two year development cycle, and metagames are "solved" faster than ever. There's also the fact that the play design team simply doesn't have the time or resources to test every possible interaction in the game, of which there are nearly infinite such interactions and combos, and really only focus their efforts on making sure Standard remains balanced.

It's also important to note that Game-Breakers are relative: many Legacy and Vintage staples are breakers in a vacuum, but the power level in those formats is so high that they all become balanced. A card has to be powerful compared to a given format's average, or enable combos stronger than that format's average, to be on this page.

Combos
With over 20,000 unique cards as of Commander Legends: Battle for Baldur's Gate, it should come as no surprise that there exists an almost incalculable number of interactions that can turn seemingly innocuous or underwhelming cards into potent engines of destruction. Note that a good number of the strongest combos listed below only require two specific cards that may or may not have a total color combination of 3 or fewer colors. Needing more parts or colors would instead push the combo towards Awesome, but Impractical or Cool, but Inefficient due to needing more setup and/or mana.
Impactful Cards
Rath and Urza block
The Rath and Urza cycles had a huge number of problematic cards. The Urza Block ushered in a phase of tournament play called "Combo Winter," in which certain combo decks were so absurdly powerful that your options were to 1) play them yourself, and hope you got to go first, or 2) lose. It also has the distinction of having had more cards from it banned in tournaments than any other... and Urza's Saga was the only set to get the entire design team for the set called up to the CEO's office and yelled at.
Mirrodin
F.I.R.E. era
With the Guilds of Ravnica set, Wizards started implementing a new design philosophy

called "F.I.R.E." (an acronym for Fun, Inviting, Replayable and Exciting). While the philosophy is unrelated to card power, the same era had massive controversy about card power levels, with bans occurring in a frequency not seen since the Urza block, and many players ended resenting F.I.R.E., blaming it for the extreme unbalance of the game, seen in basically every sanctioned format.
Commander
The Commander format allows for longer games and more elaborate plays. Its multiplayer format allows for some cards to have even greater impact than the usual 1v1 environment, leading to several cards being very strong specifically here.
Mechanics
Alchemy Rebalanced Cards
The introduction of the Alchemy game mode in Magic: The Gathering Arena allowed for something which is impossible in paper Magic: rebalancing paper cards in a digital format, in addition to rebalancing digital-only cards, allowing Wizards to deal with problem cards without having to ban them, buff struggling and underperforming cards and archetypes, or even nerf a previously banned card and unban it. While there are many examples of nerfed cards, a few stand out:
Others