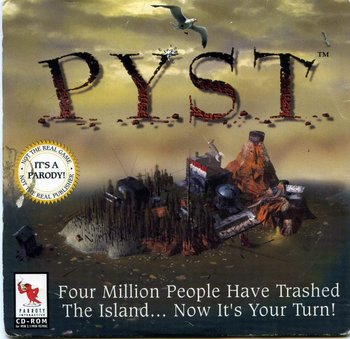 Where virtual tourism takes a rather ugly turn.
Pyst is a point-and-click comedy Video Gamenote Though given the gameplay (or lack thereof) it was more of an interactive comedy CD-ROM or a software toy rather than a proper game in its own right. for Mac OS and Windows written by American comedian Peter Bergman and published by Parroty Interactive in 1996 as a parody of the popular Myst series.
Advertisement:

The basic premise of the game depicts Myst Island, referred to ingame as "Pyst Island", as in a state of disarray after being visited and thus "vandalized" by tourists, with garbage literring the place, buildings left to neglect and graffiti revealing hints to puzzles which frustrated players in the original Myst.

Gameplay is a simplified version of the exploration mechanic as used in Myst, being little more than a series of "postcards" with interactive objects strewn around the scene. Players merely interact with the setting at his/her own leisure, though there are extras like a Full Motion Video performance from actor John Goodman as "King Mattruss", the ruler of "Pyst Island".

While it has become something of a collector's item for dedicated Myst fans, the game was critically panned for its half-hearted attempt at cashing in on Myst's popularity and its lack of interactivity and gameplay other than being a mere novelty application, with one reviewer likening it to a Seltzer and Friedberg production.