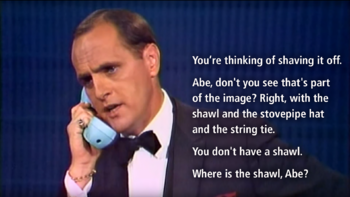 "Abe Lincoln vs. Madison Avenue", from The Button-Down Mind of Bob Newhart
"Hello? Royal Chutney Supply? Yes, Royal Falooda speaking. Yes, yes, Royal Falooda. Your mayor! Do you know there is no chutney coming in the dam? Do something! I've done my job, now you do yours! What? No chutney anywhere? [screams]"
— Mayor Royal Falooda, Simple Samosa
Advertisement:

Simply put, a phone call in which only one half of the conversation is heard, though this trope isn't limited to just phone calls. This trope is sometimes used in conjunction with a Noodle Incident or Noodle Implements (see the Saturday Night Live example below).

It can involve Repeating So the Audience Can Hear, if the audience is intended to understand both sides of the conversation. It becomes quite funny when the speaker repeats the exact words from the other side of the line, for no other reason other than this. Alternatively, the audience can be deliberately left in the dark and forced to imagine what the person on the other end is saying. This can lead either to drama and tension, or be played for laughs.

Alternatively, both halves of the conversation may be heard, per se, but from the audience's perspective, the words being spoken by the person on the other end of the line come through as comically sped-up babbling or some other form of unintelligible gobbledygook (sometimes done to imply really vulgar language). If the audience eventually gets to hear both headlines of the phone call, it may lead to Once More, with Clarity!.

Named after Bob Newhart, who used it in his Recorded and Stand-Up Comedy routines in the 1960s as well as some of his works below.