Film / The Trial of the Chicago 7 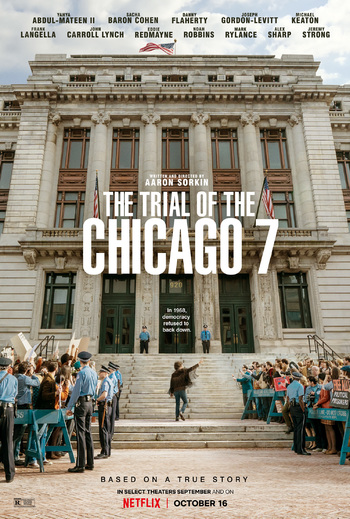 The Whole World is Watching!
Advertisement:

The Trial of the Chicago 7 is a 2020 historical drama film written and directed by Aaron Sorkin about the 1969–70 trial of the Chicago Seven, a group of anti-Vietnam War protesters indicted for conspiracy and crossing state lines with the intention of inciting riots at the 1968 Democratic National Convention in Chicago. The film was produced by Paramount Pictures and DreamWorks (and the latter company's first streaming original), and ultimately sold to Netflix in light of the COVID-19 Pandemic making a lucrative theatrical distribution impossible.

In 1969, federal prosecutor Richard Schultz (Joseph Gordon-Levitt) is bluntly ordered against his advice by John N. Mitchell (John Doman), the newly-appointed Attorney General of the Richard Nixon administration, to make examples of a group of leftist troublemakers for their supposed role in causing trouble in Chicago in 1968.

As for those defendants, they are divided into multiple camps, including moderates like Tom Hayden (Eddie Redmayne), Rennie Davis (Alex Sharp), and David Dellinger (John Carroll Lynch), and the more radical Yippies Abbie Hoffman (Sacha Baron Cohen) and Jerry Rubin (Jeremy Strong). Meanwhile, two other defendants, Lee Weiner (Noah Robbins) and John Froines (Daniel Flaherty), are at best tangentially involved in the incident if at all, and the one African-American codefendant, Black Panther Party chairman Bobby Seale (Yahya Abdul-Mateen II), was definitely not involved at all.

What follows is a drawn-out trial, with the both the moderates and defense lawyers William Kunstler (Mark Rylance) and Leonard Weinglass (Ben Shenkman) frustrated not only by the Yippies' defiant antics undermining their case, but by having to deal with Judge Julius Hoffman (Frank Langella)—no relation to Abbie—who is presiding over the trial and is obviously biased against them. Meanwhile, Seale, who has been denied legal counsel of his own choosing for the trial since his preferred lawyer is sick, is forced to protest to almost no avail.

Along the way, the defendants eventually find that for all their philosophical differences about political activism, they each have their own faults and ideals that the others can respect.