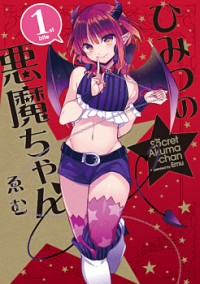 Who wouldn't fall for such a cute devil?
Advertisement:

Kurosaki Sou is a 16-year-old who has never been good with girls. Every girl he has tried wooing for has been taken away from him by his best friend Haida. One day, Haida's bragging really angers Sou, so he says he'll get a girl. Haida says that the only girl he could get would have to be an alien, angel or devil. Blinded by anger, Sou claims that he will, in fact, get with an alien, angel or devil. His attempts at getting abducted unsuccessful, Sou summons Kogure, a succubus, to take his virginity. However, Sou finds out that Kogure happens to have a penis. Sou, not taking the news well, manages to escape, but he finds out that Kogure can't go back to Hell until he fulfills their pact, and that Kogure will be living with him and going to school until then. Hilarity Ensues.

The manga ran in WAaI! from 2010 to 2014. It also has spawned an Spin-Off by the name of Motto! Himitsu no Akuma-chan or More! Devil-chan, that somehow manages to be even more funny than the original, which is currently on completed.

The Secret Devil-chan provides examples of the following tropes: