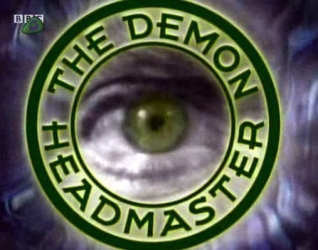 Funny you should be so tired, so early in the day...
Advertisement:

The Demon Headmaster is a British book written by Gillian Cross in 1982. The story concerns Dinah Glass, an orphan who's just recently been fostered by the Hunter family. On her first day at her new school, she makes some interesting observations:

Fortunately, she discovers that her foster brothers are incapable of being hypnotised in such a manner, and have formed a group with three other students known as SPLAT (the Society for the Protection of Our Lives Against Them).

The third book, Hunky Parker is Watching You (1994, later reprinted as The Revenge of the Demon Headmaster) follows SPLAT as they become entranced in a new Merchandise-Driven franchise, Hunky Parker (an "ed-U-cated" pig). Dinah (for once, the only one not entranced) discovers that the show not only uses Subliminal Seduction, but that the Headmaster is (surprise surprise) behind the whole thing, even going so far as to use a large holiday centre as a sort of sweat shop.

This was followed by The Demon Headmaster Strikes Again (1996), with the Headmaster this time running a Biogenetic Research Centre, which is researching the ability to clone people.

The Demon Headmaster Takes Over (1997) follows on directly from the last one, with the Headmaster clone developing a computerised brain and then losing control of it.

The final book in the series to feature Dinah and the other original children is Facing the Demon Headmaster (2002), where SPLAT once again run up against the Headmaster, who is this time involved with a new club. A new entry in the series, Total Control (2017), features a new group of schoolchildren and sees the Headmaster return to his original occupation in a new academy; this was followed by another new book, Mortal Danger, in 2019.

In 2019, the BBC announced that a new Demon Headmaster series had been commissioned, and would be an adaptation of Total Control, which commenced airing in October 2019.