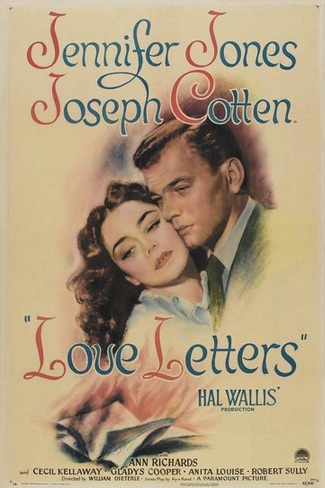 Love Letters (1945) is Melodrama/mystery film directed by William Dieterle, starring Joseph Cotten and Jennifer Jones, and featuring a screenplay by, believe it or not, Ayn Rand.

British soldier Allen Quinton (Cotten), has been writing love letters to a woman named Victoria on behalf of Roger Morland (Robert Sully), who doesn't really care about the poor girl. Allen falls in love with Victoria through her letters but decides to stop writing to her, never revealing the truth.

Back in England, Allen finds out that Roger has died in an accident. Depressed by the news that Victoria has also died, he goes to a party where he meets Dilly (Ann Richards). Through some excessive drinking, Allen tells his misfortunes to Dilly, who cryptically tells him she knows the whole story herself: Roger's death was no accident but a murder. At this party, he also meets a beautiful girl called only Singleton (Jones), but he doesn’t notice her much.

Later, Allen finds Singleton in Dilly’s apartment and is interested in her for her vivaciousness and her amnesia that affects her life greatly. Once Singleton leaves, Dilly explains to Allen that Singleton IS Victoria Morland. She married Roger Morland but murdered him when she found out the truth about the love letters. The problem is that from the moment the murder happened Victoria has become completely amnesic: forgetting her identity, her marriage, her aunt Beatrice (Gladys Cooper), and those lovely love letters.

Determined to be with Singleton even if he’s the one who played a part in her ruin, Allen and Singleton live happily until her memories start to creep back.

Victor Young composed the moving theme for this film.