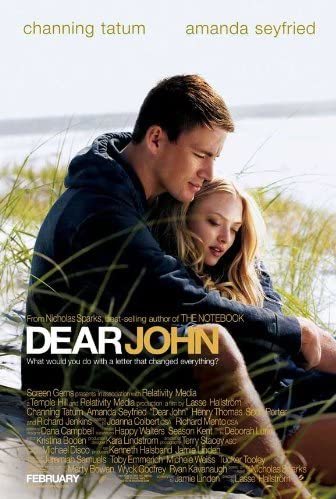 "Sometimes you have to read between the lines."
Advertisement:

Dear John is a 2010 romantic war drama film, directed by Lasse Hallström, based on the novel of the same name by Nicholas Sparks. It stars Channing Tatum and Amanda Seyfried, with supporting performances by Richard Jenkins and Henry Thomas.

John Tyree (Tatum), on leave from the Army Special Forces, returns to his hometown in the Outer Banks to spend time with his father (Jenkins) and surf. Savannah Curtis (Seyfried) is on Spring Break from college with her friends. While surfing, John takes notice when Savannah accidentally drops her purse off the side of a pier into the ocean. After John dives in to save it, they strike up a tenuous relationship, which continues after he is redeployed. Due to the sometimes remoteness of John's assignments, they correspond with each other through a series of letters.