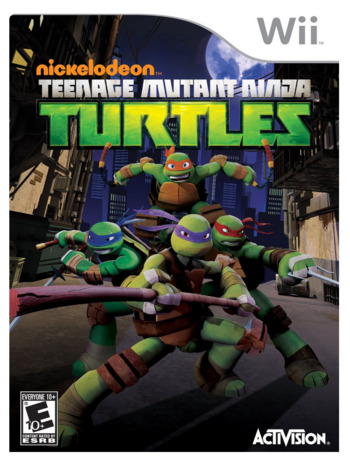 Teenage Mutant Ninja Turtles (2013) is a game developed by Magic Pockets and published by Activision. It was released on October 22, 2013 for Xbox 360, Nintendo Wii, and Nintendo 3DS. It is based on the 2012 TV series by Nickelodeon.

Released right on the heels of Teenage Mutant Ninja Turtles: Out of the Shadows, also released in 2013, this game was aimed at a slightly younger audience than OOS, offering more simplified gameplay and cell-shaded characters (who actually looked like their cartoon counterparts), a different story, and was much more polished and seemingly more finished than its counterpart. Though the two games share many similarities, it is a separate game and story.

One night, the four Turtles go on the rooftops of New York for patrol, and they are attacked by Foot Soldiers. As they pursue them, they learn, with the help of April, that The Foot have teamed up with The Kraang and built a Mutagen bomb and want to mutate the entire city. Can the Turtles disarm the bomb? Will they have to face Shredder and his mutated Quirky Miniboss Squad? What of The Kraang and April?

The game can have up to four players at once playing all the Turtles, while the game's AI will play the Turtles on screen not being controlled by the PC. The voices are the authentic Voice Actors from the show.