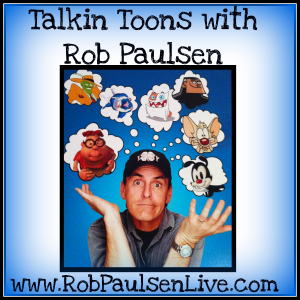 is a podcast where veteran voice actor and singer, Rob Paulsen, talks about cartoons. For about an hour (give or take 30 minutes), Paulsen will speak about his experiences as a voice actor throughout the years and field questions and other comments from fans and those interested in becoming a voice actor themselves. Often times, Paulsen will also have a guest to join the show including creators and writers for cartoons, impressionists, musicians, comedians, voice directors and other actors and voice actors.

Talkin' Toons joined the Tech Jives Network and on February 27, became a videocast on Ustream. During this time, Rob and his guest(s) are accompanied by Abi Collins who serves as the show's moderator and her husband James Cluster oversaw show production. From June 2013 until 2015, the Jon Lovitz Comedy Club, where all the previous Live Specials took place served as the main setting for the podcast.