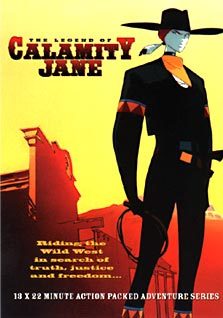 The Legend of Calamity Jane was a 1997 cartoon on the Kids' WB!, made by the French animation studio Contre Allée that depicted the adventures of the historical Calamity Jane. The series was gritty in tone, and had an art style similar to that of Superman: The Animated Series, Roswell Conspiracies: Aliens, Myths and Legends, or fellow piece of French animated genius Night Hood.

This cartoon aired exactly three times before it was unexpectedly pulled off the air by Kids' WB!, though an entire season aired in other countries. No explanation has ever been given as to why the show was suddenly cancelled, but some have suspected that Moral Guardians got on the show's case for its gun violence.