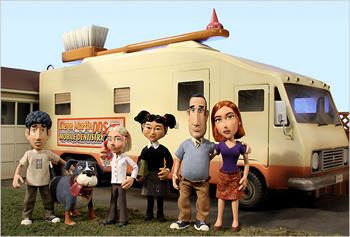 Glenn Martin, DDS is a stop-motion Nicktoon that aired on Nick @ Nite from 2010 to 2011, created by former Disney executive Michael Eisner and Celebrity Deathmatch creator Eric Fogel about a dentist (voiced by Kevin Nealon from Saturday Night Live and Weeds) and his family traveling cross country in their RV. It was only meant as a summer trip but since their house burned down due to his lousy driving, Glenn decided to continue the trip indefinitely.

The show was the fourth original program to be created for Nick @ Nite note  The others being Hi Honey, I'm Home!, Fatherhood and Hi-Jinx . Created in an attempt to bring more animated programing aimed at older audiences to Nick @ Nite in a similar vein to Adult Swim, it underperformed. It only lasted 40 episodes the show was cancelled in November 2011. It was produced by Tornante Animation, and Canada's Cuppa Coffee Studios. Nickelodeon has thus far not produced any more new animated series for adults.

Jackie is shocked (and happy for the wrong reasons) to find out her ex Gary still holds a candle for her in the creepiest way possible.

Jackie is shocked (and happy for the wrong reasons) to find out her ex Gary still holds a candle for her in the creepiest way possible.