Webcomic / The Last Days of FOXHOUND 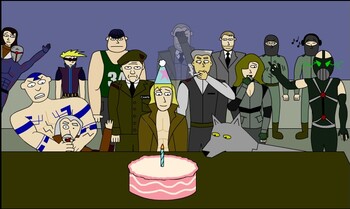 The Last Days of FOXHOUND is a fan webcomic by Chris Doucette. Hosted at doctorshrugs.com,

it is centered around the Quirky Mini Boss Squad from the first Metal Gear Solid game, starting several years before the events of the game, when the highly dysfunctional group was still running top secret missions for good old Uncle Sam. The comic is mostly a combination of affectionate parody (for example, a major running gag is mocking the game's odd ideas about genetics) and a deconstruction of life within a quirky miniboss squad where everyone hates one another. Throw in a pinch of hilarity ensues, a dash of Sympathetic POVs, some Comedic Sociopathy and a metric fuckton of swearing to accompany the antics, and the recipe is complete.

About midway in the comic's run, Cerebus Syndrome increasingly takes hold, and the gags get put on hold more and more for the deconstructions and showing the group becoming involved with/aware of the Patriots, their decision to turn rogue against the United States and attempt to revolt against the Patriots, right up until the inevitable conflict with Snake at Shadow Moses.

In a rare accomplishment for a webcomic, the story completed its entire arc, and the complete 500 comic long strip (plus some filler) can be found at the gigaville archive.

Doucette's has since started a new project on doctorshrugs, a hybrid webcomic/browser game called Demon Thesis.

A fandub of the first twenty-five pages of the comic was released on July 21, 2013 by Broad Spectrum Studios.

It is available here.

The Last Days of Foxhound contains examples of: