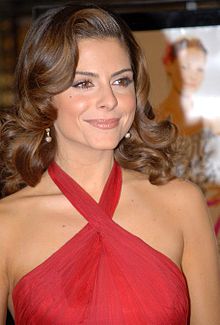 Maria Menounos (born June 8, 1978 in Medford, Massachusetts) is an American actress and television host. Her parents are Greek and she speaks Greek fluently.

She occasionally wrestles in WWE and competed at WrestleMania 28, teaming with Kelly Kelly to defeat Beth Phoenix and Eve Torres.

She competed in Season 14 of Dancing with the Stars with Derek Hough as her partner. Her team was the 9th to be eliminated, earning them 4th place.

She was in a relationship with the director and producer Keven Undergaro since 1998 and married him in 2017.

This actress demonstrates the following tropes: