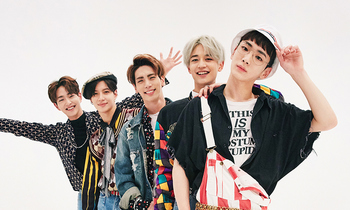 SHINee (Korean: 샤이니, pronounced "shiny") is a South Korean five-member contemporary dance group under SM Entertainment. With the song "Replay", they debuted on May 25, 2008.

The group started very young with a colourful R&B image (since incorporating influences from genres like rock, hip-hop and EDM) and have accrued a slew of fans known as SHINee World ("Shawols" for short). They are also known for their incredible live vocals and highly synchronized and complex dance routines, and have since become one of the most popular groups in K-pop, both in Korea and overseas, which earned them the title "Princes of K-Pop". While Jonghyun's and Onew's voices are the most celebrated, and Taemin is the stand-out dancer, every member is known to sing and dance competently.

While the group started out as a five-piece, Jonghyun tragically committed suicide on December 18, 2017

following a long period of depression

, leaving the group as four.

On January 31st, 2021, the members confirmed in a live video that they would be making a comeback in February, releasing their seventh studio album after an almost three-year-long hiatus.