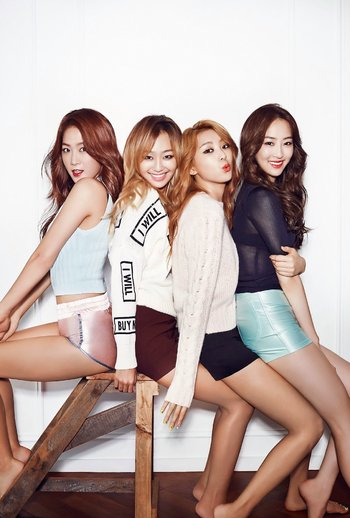 Sistar was a four-member Girl Group from Starship Entertainment. They debuted in June 2010 with lead single "Push Push", and quickly followed up with singles "Shady Girl" and "How Dare You". They gained recognition after the brief stint of their first duo single, "Ma Boy", featuring members Bora and Hyorin, and steadily gained popularity after their first album, "So Cool" was released. However, it wasn't until their single, "Alone", that they finally rose to national recognition. They have since been pioneered as one of the leading girl groups in Korean Pop Music, due to their catchy dance tunes, unshakable confidence, and gratuitous amounts of fanservice., and were dubbed the "Queens of Summer" due to releasing a hit single almost every June/July.

On May 22, 2017, the members announced they would be disbanding

following the release of their final song "Lonely" on May 31.