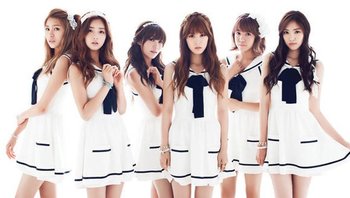 They started off as a 7-member girl group until member Hong Yookyung left, allegedly to pursue her studies. Scandal arose when her father seemed to claim

that the company had simply used her for her family's money and then kicked her out; however later he refuted such claims and bullying rumours

, saying neither Cube nor the girls have done anything wrong and that the girls too were on the brink of officially getting kicked out.

They have a sub-unit called A Pink BnN, formed in 2014 and composed of members Yoon Bomi and Kim Namjoo. Their first single, “My Darling” was released in the same year.

A Pink is best known for their feminine, innocent, and public friendly image that differentiates them from other girl groups, making them considered one of the most successful 3rd Generation idol groups.

A Pink provides examples of the following tropes: