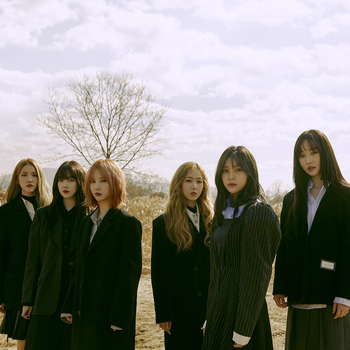 GFRIEND (여자친구) was a six-member generation-defining South Korean Girl Group despite coming from a small company named Source Musicnote that joined HYBE in late 2019 as a subsidiary. They debuted in 2015 and disbanded in 2021. However, the members are still close friends and plan to reunite as a group someday.

The group developed a strong musical identity that encapsulates a nostalgic feeling, whether it's through a dreamy, melancholic, sentimental sound presented especially through orchestral pop and ballads or a light-hearted, funky and energetic pop influenced by retro musical styles.

The group had a continuous storyline named "A Tale of the Glass Bead", their own Fictional Universe intertwined with their music. The story went from a school series to a magical narrative. The main plot revolved around the friendship of a group of girls while they grew up surrounded by a mysterious universe and needed to deal with loss, their friendship falling apart and a bittersweet feeling as they struggled to be together. Melodies, lyrics, choreography, and music videos all come together to tell a story, making storytelling a strong signature of the group.

They debuted on January 16, 2015 with the lead single “Glass Bead” (Season of Glass), gathering several rookie awards and dubbed “powerful innocence” for their Girl Next Door image and hard-hitting dance moves, averting the stereotype of weakness associated with femininity and echoing their youth as they tell their own Coming of Age journey.

The group reached huge success after completing a school trilogy with the summery “Me Gustas Tu” from Flower Bud and the snowy “Rough (Running Through Time)" from Snowflake. On July 11, 2016, they released their first full album LOL in two versions — "Lots of Love" and "Laughing Out Loud" with a retro-pop sound in the energetic single "Navillera" followed by the funky "Fingertip" in 2017 from the New Sound Album, The Awakening. They continued the year with the double summer release "Love Whisper" (Parallel) and "Summer Rain" (Rainbow), showing two sides of the season as the latter anticipates autumn.

They held their first concert called Season of GFRIEND in 2018 and with the release of "Time for the Moon Night", the group fully embraced a more mature sound with a concept named "passionate melancholy", expanding their musical spectrum and theatrical performances. Later, they released a special summer album with the brassy "Sunny Summer" as the title track.

The second full album Time for Us was released in 2019 with the sentimental roller coaster "Sunrise", followed by the tropical "Fever" from Fever Season. They finished the year with the highly praised first Japanese studio album Fallin' Light, which includes the previous singles "Memoria" and "Flower".

Labyrinth, Song of the Sirens and Walpurgis' Night are part of the 2020 "回 (hui)" series, marking a new era for GFRIEND that, after completing five years of career, became part of HYBE when their agency was acquired. The trilogy is known for the mellow "Crossroads", bombastic "Labyrinth", alluring "Apple" and the retro-earworm "Mago", representing the members metamorphosing into witches (their new concept revolving around empowerment). The album series was important for the sextet and their growth as artists as they began to have more direct input and participation in songwriting.

On May 18, 2021, it was announced that the group would be disbanding

following an inability to agree on new contract terms, with the members uploading handwritten letters

to their fans to social media to thank them for their support. Until October, all members officially joined new agencies. Sowon in acting, Yuju in music and Yerin in the entertainment field. Eunha, Sinb and Umji formed a Power Trio girl group called VIVIZ.

Shortly after the remaining members announced their new label, they reunited in Sowon's Instagram live. The leader said GFRIEND was forever and that we shouldn't cry, matching her last Weverse post saying that they will definitely meet again someday and Sinb agreed, saying Sowon is VIVIZ's honorary leader and that they are still GFRIEND.

Sowon also acknowledged their shocking ending saying there are things they can't say due to the nature of their job and that she understands it must be frustrating for fans as much as it's for them. Umji finished saying she has written a song for the group in the hopes they can sing it as six again and that's one of her ambitions, to share this song with the world through the voice of the members.

The tropes waiting for you (yes, you)

General Tropes
Music Tropes
Including songs, performances, choreography and music videos (non-related with the story).
Story Tropes
Including music videos, short films, mini books and additional content. Unmarked spoilers.
"I may seem like a clear glass bead, but I won't break that easily."