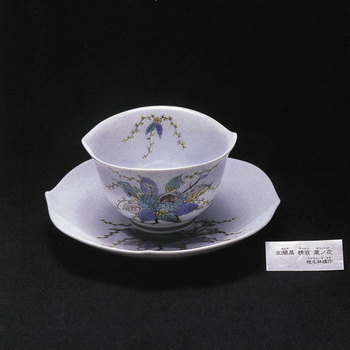 Insert stock phrase about (not) someone's cup of tea.

Karuki Zamen Kuri no Hana (加爾基 精液 栗ノ花, Chlorinated Lime, Semen, Chestnut Flower, 2003) is a 2003 album by Shiina Ringo. It was released three years after the commercially and creatively successful Shōso Strip. While it lost in respect to its sales, it was an even greater artistic achievement.

This album embraced many genres; it is pop, rock, jazz, and Baroque Pop at the same time, with elements of folk and prog thrown in too. Its tracks are all parts of the most eclectic Genre Roulette.

This time, Shiina Ringo was eager to produce the album herself, and she managed to. She also co-arranged nearly the entire album with her frequent collaborator Uni Inoue (Toshiyuki Mori provided string arrangements for a few songs and arranged track five entirely by himself; Ukigumo, later of Tokyo Jihen, arranged the vinyl bonus track). Predictably, it took longer to record than her previous album had. She did overdubbing and multitracking herself. At times, she recorded two instruments for one track in different rooms. In the process, she played numerous instruments.

Shiina Ringo declared this album to be her last solo effort, and afterwards, she started a band, Tokyo Jihen. She returned to her solo career in 2009 after three successful albums with that band - which, however, could not compete against Karuki Zamen Kuri no Hana - and 2007's Heisei Fūzoku, a collaboration with arranger Neto Saiko (and also the soundtrack to the film Sakuran, based on the manga of the same name), which has probably been her most acclaimed release since this one. Her solo work since 2009 has mostly had muted receptions compared to this album, though Sanmon Gossip has still been pretty well received due to its stylistic diversity. Regardless, Karuki Zamen Kuri no Hana remains her most critically acclaimed recording and is likely to remain that way.