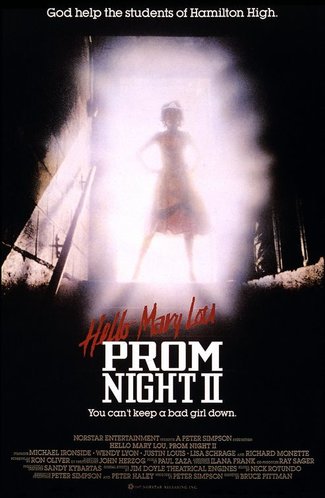 The film centers around the ghost of one Mary Lou Maloney, a girl who was accidentally killed during her prom queen crowning in the 50s. Her spirit is accidentally released by a girl named Vicki when she finds her supposed prom queen regalia in the school's prop room. Mary Lou possesses her, and sets out to get revenge on those responsible for her death and become the prom queen once more.

The movie actually has nothing to do with the original Prom Night, other than the title, and the film's school having the same name (this is a coincidence). It was filmed as its own independent movie as "The Haunting of Hamilton High", but the studio purposed it as a sequel to Prom Night in an attempt to make more money. The producer, Peter Simpson, blames this for the film's box office failure, and insists that it should be watched as its own movie, not a sequel.

The film has developed a small cult following following its release on home video, and got a direct-to-video sequel of its own: Prom Night III: The Last Kiss.

Example of:
Not My Driver