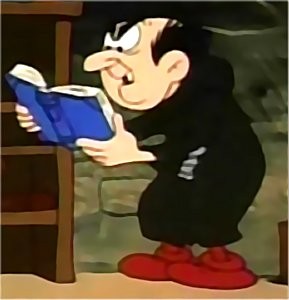 The main enemy of the Smurfs. 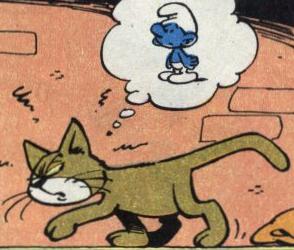 Gargamel's scruffy and much put-down-upon cat.

Gargamel's apprentice, a Bratty Half-Pint who was more or less dumped onto the evil wizard after he was kicked out of sorcerer's school for causing trouble with the teachers. He helps Gargamel out with his plans, though is often less than enthusiastic about it.

An evil witch, obsessed with her looks despite being far from beautiful.

Gargamel's godfather in the cartoon series.

An evil witch, who mostly wants to make the world as miserable as she is.

A traveling thief who steals the Smurfs' magic flute when Peewit had it. Appears only in The Smurfs And The Magic Flute.

A greedy official who is an associate of Matthew McCreep. Appears only in The Smurfs And The Magic Flute.

A female Naughty created by Gargamel.

A male Naughty created by Gargamel.

Advertisement:
Nemesis
The most evil character in the franchise, bar none. Perhaps the most evil character Hanna-Barbera has ever made in any work as all other Hanna-Barbera villains have standards while Nemesis has none. He began life as a rather handsome wizard, but after attempting to steal a powerful artifact, which would have brought grievous consequences to a great many people, if not the whole world, he was cursed to have his outer appearance match his inner personality. Hideous, twisted, and cruel, he cares only about his own power, wealth, and attempting to alleviate his condition, no matter how slightly regardless of the cost to others. He is introduced trying to steal the Smurfs' Long Life Stone, dooming the entire race to extinction, purely for the sake of eliminating his hiccups.
Genie Meanie
A rather obnoxious genie that can only be summoned from his bottle for one day after over a century of dormancy, before returning to dormancy, for another extended period of time. He will return to dormancy at exactly sunset even if he's in a conversation with his summoner. Further, anyone who is unfortunate enough to summon him, even by accident, but doesn't know the proper password has something highly unpleasant happen to him. Those who do know the password get three wishes, which he will be reluctant to grant, and no more.
The Stranger 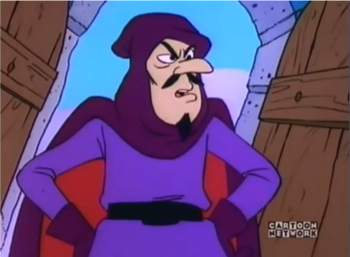 A mysterious individual that appears exclusively in the Smurfs Christmas Special episode.