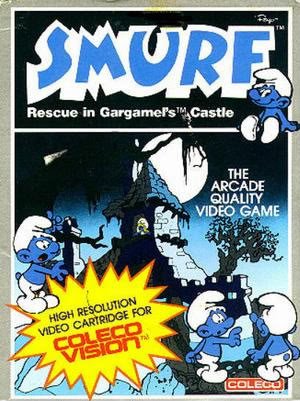 Smurf: Rescue In Gargamel's Castle is a 1982 2D platform game based on The Smurfs that was developed by Coleco for the Atari 2600 and the ColecoVision. In the game, you play as a Smurf, who must travel through forest and the mountains in order to reach Gargamel's castle to rescue Smurfette. As you travel from left to right through each screen, you must jump over obstacles, avoid animals, and keep your life meter from completely running out.
Advertisement:

A Flash game sequel, Day Of The Purple Smurfs