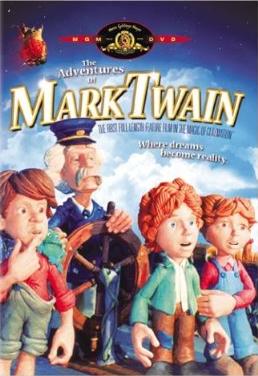 Once every seventy-five years, Halley's comet pays its cosmic visit. In 1835, the comet returned and America's most famous author was born.

Mark Twain, "the most conspicuous man on the planet," believed his destiny was linked to the comet.

He wrote: "The Almighty has said, no doubt, 'There go those two unaccountable freaks; they came in together, they must go out together.'"

Attempting to describe The Adventures of Mark Twain in any sane fashion is probably an exercise in futility. But what the heck. We'll give it a shot.

First of all, discard any historical knowledge you might have of Samuel Clemens, because in this world, he doesn't exist. But his nom de plume, Mark Twain, is real, and so are Tom Sawyer, Huck Finn, and Becky Thatcher. Yeah, we know. Just roll with it. In this world, Mark Twain also has a Cool Steampunk Airship, which he intends to ride into outer space to chase Halley's comet. Tom, Huck, and Becky catch word of his balloon and sneak onboard, joining Mr. Twain on a journey beyond the stratosphere to chase the comet. How do they pass time onboard the airship? By telling (and living) stories, of course. Famous Mark Twain stories. Like The Adventures of Tom Sawyer. (We know. Again.) And The Diary of Adam and Eve. And The Mysterious Stranger.

This 1985 movie is known for being absolutely gorgeously rendered in Claymation by Will Vinton Studiosnote Vinton himself coined the term "claymation." This was his only theatrically-released feature.. It's also known for being creepy as hell. Literally. It's sometimes considered a "children's movie," but this isn't strictly the case — it's probably too scary for some kids, but anyone who likes animation will probably enjoy the lush visuals. All in all, it's a fascinating and loving Deconstruction of the man and a number of his stories — particularly his later ones which caused many to label him a Nietzsche Wannabe.