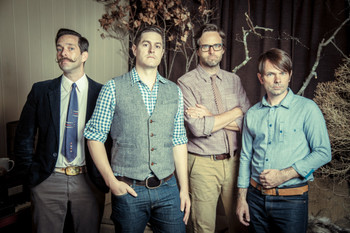 Do you know, what they mean, when they say, they don't want to be alone
But if I can't swim after 40 days,
And my mind is crushed by the crashing waves
Lift me up so high that I cannot fall
Lift me up.
—Jars Of Clay, "Flood"
Advertisement:

Jars Of Clay is an American Christian rock band from Nashville, Tennessee, originally formed in 1993 at Greenville College in Illinois. It consists of Dan Haseltine as lead singer, Charlie Lowell on keyboards, Stephen Mason on lead guitars and Matthew Odmark on rhythm guitars.

For most people, the band is remembered for the song, "Flood", which was such a huge hit that it gave the group the opportunity to tour with the likes of Sting during the late 90's and caused their debut album to go double platinum in the US.

However after that debut album the group were all but forgotten in the mainstream music circuit while maintaining a very big presence in the Christian Rock industry through most of the 2000's. Even this popularity eventually faded to a degree until the band was left with a relatively small but loyal fanbase that still support them to this day.

To date, the group has released 10 full-length albums:

Tropes that apply to Jars Of Clay include: