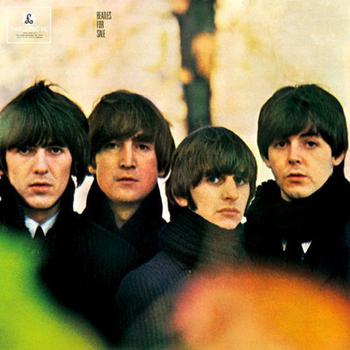 "Oh, I need your love babe / Guess you know it's true..."
Advertisement:

Beatles for Sale is the fourth studio album by The Beatles, released in late 1964. It was recorded at a time when the band started to get tired of all the mayhem around them, combined with endless touring and recording. This is reflected in the songs on this album, with many being about feeling down and dealing with break-ups or troubled relations. This is also reflected by the presence of six cover songs on the record, after A Hard Day's Night was all originals. In America, Capitol Records divided the album's songs between two releases, Beatles '65 and Beatles VI; it didn't get a US release until the Fab Four's international catalog was standardized in 1987.

Most of the more reflective and insightful lyrics were inspired by Bob Dylan, of whom all the Beatles were great admirers, which shows how the band was gradually Growing the Beard as songwriters.

The album is best known for the hit song "Eight Days a Week" and fan favourites such as "No Reply", "Baby's in Black", and "Rock and Roll Music". Dominated by Lennon just as with prior album A Hard Day's Night, with Lennon taking lead vocals on seven tracks versus three for McCartney (they harmonized on two, with Starr and Harrison getting one each).