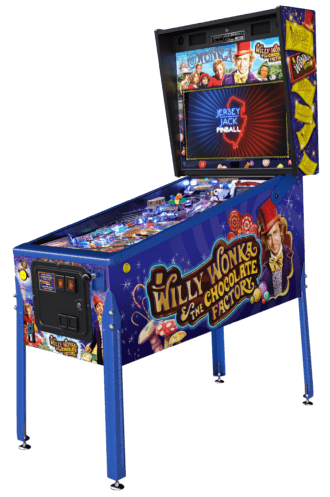 Willy Wonka & the Chocolate Factory is a pinball machine designed by Pat Lawlor and released by Jersey Jack Pinball in mid-2019.

Based on the 1971 film of the same name, the player is tasked with collecting a number of sweets while going through various rooms in Wonka's fantastical factory. Their progress is tied to the five children on the tour (which culminates in the potentially potent Kid Multiball). The ultimate goal is to find Golden Tickets (which are tied to the game's various other modes and can provide valuable multiballs along the way). Acquiring all five gives the player a shot at completing Pure Imagination. Also worth noting are the various doodads within the machine: a spinning Everlasting Gobstopper (tied to the Most Secret Machine), a small Wonkavision screen on the playfield, and (in the higher-tier versions) a Wonkavator ball lock that lasts from game to game.