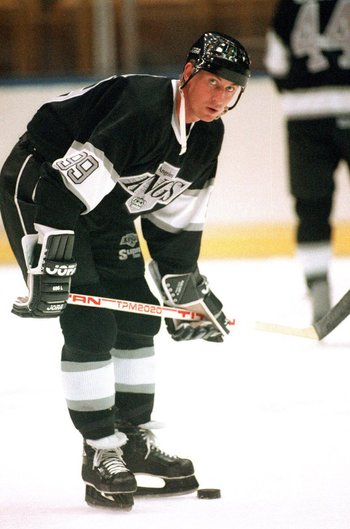 The Great One
"You miss 100% of the shots you don't take."
—A very famous quote from the man himself
Advertisement:

Wayne Douglas Gretzky (born January 26, 1961) is a Canadian former NHL player for the Edmonton Oilers, Los Angeles Kings, St. Louis Blues, and New York Rangers. Considered by almost everyone to be the greatest hockey player of all time. Known simply as “The Great One”. The guy has broken so many records that if we were to list them here, the reader of this article would be here forever. Extremely well liked by hockey fans all over for his excellent playing, his apparent love and dedication to the game, good looks, and being one of the nicest hockey players ever. Seriously, when Gretzky actually fought someone, hell froze over.

Very popular with endorsements, promoting companies like Coca-Cola, Domino's Pizza, and Sharp Electronics just to name a few. Also made his mark on video games with Midway's Wayne Gretzky's 3D Hockey (basically the NHL answer for NBA Jam) and 989 Studio's Gretzky NHL games on the PlayStation 2 and PlayStation Portable.

Won 4 Stanley Cups with Edmonton, then in 1988, came “The Trade”. He was traded to the Los Angeles Kings, effectively making hockey extremely popular on the West Coast of the United States overnight and pissing off a lot of Canadians. Seriously, the Canadian government tried to intervene and block the trade, showing how much Serious Business hockey is in Canada. Gretzky also got married to American actress Janet Jones just a few months before, thus, many Oilers fans misblamed her for using her acting career as an incentive for Wayne to move to Los Angeles. After he was unable to secure a cup win in Los Angeles in '93 and not getting along with the new Kings owners, Wayne then went to the St. Louis Blues. Don't remember that? You weren't missing much, because not even a year later, he went to the New York Rangers, where he played until he closed out his career in 1999. His number 99 was retired pretty much immediately league-wide after he stopped playing, the only number so honoured, and he was inducted to the Hockey Hall Of Fame the same year he retirednote (He is the last player to have the usual waiting period for induction waived.).

Also was the owner of the Phoenix Coyotes and served as their head coach for a while, although the team did not see much success when he was their head coach. The Coyotes never made the playoffs while he ran their bench, and Gretzky left the team after it filed for bankruptcy. He now considers his coaching career to be an Old Shame.

In 2002, he served as the executive director of Canada's men's Olympic hockey team. The team got off to a rough start and were harshly criticized by Canadian media and mocked by their competitors. When Gretzky was questioned about it at a press conference, he replied with an angry tirade about how much the Canadians' competitors hated them, how many observers wanted them to fail, what he saw as a Double Standard that would have had the Canadians condemned if they used the same kinds of tactics their opponents used on them, dismissed claims of dissent in the Canadians' dressing room as "American propaganda" and concluded by saying his team was a proud group that would remain Defiant to the End. Many people were shocked at the even-tempered Gretzky acting the way he did, and he was widely mocked in foreign media. His speech turned out to be a Batman Gambit, as his tirade drew the media's focus onto him and relieved pressure on his players. They and their Canadian fans also treated his words as a Rousing Speech, going on to win Canada's first men's gold medal in 50 years.

Most recently, he's joined Turner Sports as an analyst for TNT's NHL coverage (a split deal with ESPN beginning in the fall of 2021).