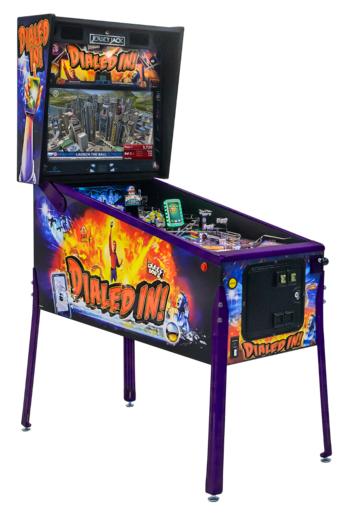 "What would you do with THE POWER?"

Dialed In! is Jersey Jack Pinball's third pinball machine. It was released in 2017, after The Wizard of Oz and The Hobbit. However, unlike many games, which were released as Licensed Pinball Tables, Dialed In! is completely original, designed by none other than Pat Lawlor.

The game takes place in a SimCity-like location, Quantum City, where the player happens to stumble upon a phone that controls or starts any of 11 disasters. Pinball players were quickly skeptical based off of the theme of the game when it was revealed at Pinball Expo 2016. However, Dialed In! became more universally appreciated and loved based on Pat Lawlor's clever design and creative freedom—something that was lacking during the late 90s and 2000s after the major success of The Addams Family and Twilight Zone.

"Hello. I'm calling from Dialed In Electronics. We have detected a problem with your trope page."