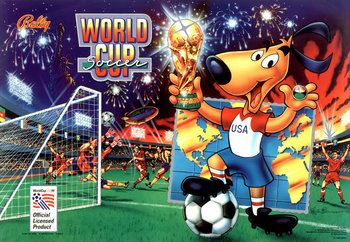 It Kicks!
Get ready. This summer, the World Cup is taking over the U.S. And WORLD CUP SOCCER pinball is ready to take on the world!
Advertisement:

World Cup Soccer is a pinball game by Williams Electronics (under the Bally label), designed by John Popadiuk and released to promote the 1994 World Cup.

As far as pinball goes, the table pretty accurately emulates the World Cup experience - you buy tickets, fill the stadiums with fans, and most importantly shoot goals. In addition, you move through the various cities the Real Life teams went to, and eventually take on the top contender (Germany) to become champion.

A digital (and slightly modified) version was available for The Pinball Arcade until June 2018 (when the license to it and all other Williams/Bally tables expired).