Pinball / The Who's Tommy 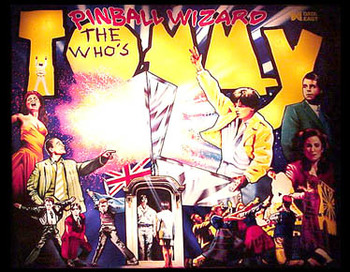 Tommy - A Name That Means Pinball
"See Me, Feel Me, Touch Me, Heal Me."
Advertisement:

The Who's Tommy (Full title: The Who's Tommy Pinball Wizard) is a 1994 arcade pinball game by Data East. It was designed by Joe Kaminkow, Ed Cebula, Lonnie D. Ropp, and Lyman F. Sheats Jr., and is based on the 1993 award-winning Broadway musical by Pete Townshend and Des McAnuff (itself an adaptation of The Who's Rock Opera of the same name).

As with the source material, the pinball table chronicles the life of Tommy Walker, a child traumatized in his youth into being deaf, blind, and mute. Despite his disabilities, Tommy proves to be an extremely adept Pinball player; he gradually finds himself elevated to the head of a religious movement when his condition is miraculously cured, and must struggle to cope with his newfound fame.

The pinball table recreates the main scenes of the story through a series of "Union Jacks", such as Tommy's traumatic Christmas, Smashing the Mirror, a visit to the Acid Queen, and Tommy's shunned love Sally Simpson. Completing all twelve Jacks starts the "Pinball Wizard", a six-ball multiball mode that is played while the player's view of the flippers is blocked by a pair of opaque blinders.

The Who's Tommy has been widely praised by players for its excellent and balanced use of the entire table. With a mesmerizing light show, over twenty songs from the Broadway show, and lots of fast action and fun shots, it's considered one of Data East's best pinball games, if not their best ever.

Ten prototype tables were produced for use as props for off-Broadway productions. The prototype included fewer voice samples, electro-mechanical chime units, lacked the eyes on the blinders, and six pop bumpers instead of three. Another version made an appearance during the 1993 Macy's Thanksgiving Day Parade during a preview of the Broadway musical. This version lacked the backbox and was locked in autoplay mode.

A heavily modified (and gold-festooned) version of this game was featured as the "Richie Rich" pinball in the 1994 live-action Richie Rich film. Kabuki

, another modified version of the game, was presented to the Chairman of Namco in 1994 as a goodwill gesture during corporate buyout talks.

The Who's Tommy Pinball Wizard demonstrates the following tropes: