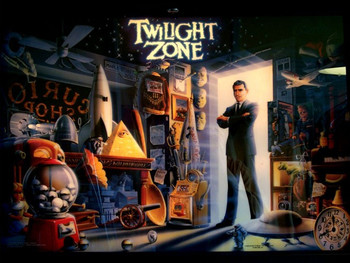 So this is where Rod retired to...
"You unlock this door with the key of imagination."
— Rod Serling, at the start of the game
Advertisement:

Twilight Zone is a Pinball game designed by Pat Lawlor and illustrated by John Youssi. Released in 1993 by Williams Electronics under their Bally label, it is based on the original The Twilight Zone (1959) television series, with dozens of cameos, shout outs, and references to various episodes.

Taking place in a curio shop, the player must explore various Twilight Zone artifacts to gather fourteen door panels. Tasks include surviving a riot in Town Square, collecting the Powerball from the Gumball Machine, Battle the Power, taking photos with the fortune-telling Camera, and collecting the Spirals around the playfield. Reassembling all fourteen panels opens a door to another dimension, leaving the player Lost In The Zone...

Due to the runaway success of The Addams Family, Pat Lawlor was given carte blanche privileges in the game's design; the result is arguably one of the most complex pinballs ever, with more patent-pending features than any other table ever made and an impressively deep ruleset. It has been rated "Best Electronic Pinball Machine of All Time" on the Internet Pinball Machine Database. Despite this, in its initial release it didn't sell well — the huge success of The Addams Family was tough to follow, though Zone has since been Vindicated by History.

A digital version of the game was formerly available as part of FarSight Studios' The Pinball Arcade collection until the WMS license expired on July 1, 2018.

Beyond this door is a dimension of tropesnote Don't touch the door!:

"Dance with the devil at your own risk, in the Twilight Zone."