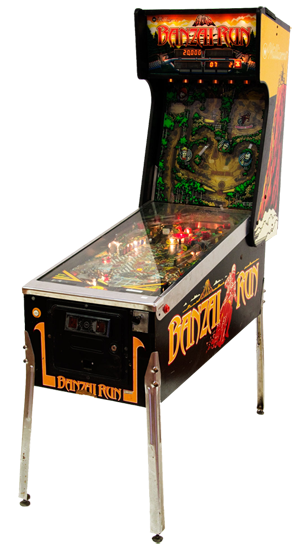 You've Never Seen Anything Like This!
"Go for the Hill!"
— Announcer
Advertisement:

Banzai Run is a Physical Pinball Table designed by Pat Lawlor and Larry DeMar, with artwork by Mark Sprenger. It was released in 1988 by Williams Electronics, and is notable for its continuous playfield, which extends vertically into the backbox.

The game itself is centered on the 1988 Banzai Run Supercross race on the notorious Banzai Hill track. As an up-and-coming racer, you are up against four rivals: Green Machine, Yellow Belly, Blue Beard, and Red Hot. Build up laps on the lower playfield, then hit the twelve color-coded targets to challenge each racer and access the hill. Once that's done, ride the Ball Lifter to the vertical playfield to defeat the challengers, then take on the King of the Hill in a light-and-sound spectacular.

Although some earlier pinball games included bagatelle-style minigames in the backbox, Banzai Run was the first to have a fully-featured vertical playfield with flippers, kickers, and sinkholes. Besides its novel design, Banzai Run was the first pinball game designed by Pat Lawlor, and established many of his preferred gameplay elements that would appear in later pins.

A digital version was available on the PC and mobile versions of The Pinball Arcade before being taken down at the end of June 2018.