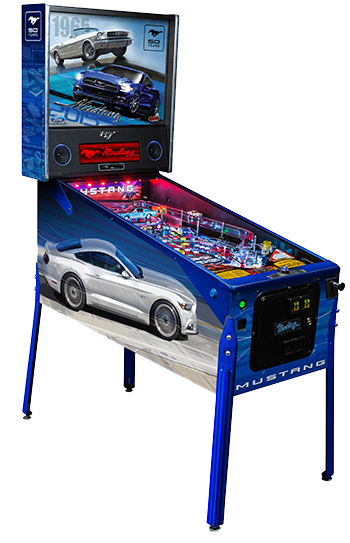 The Limited edition.
"The accelerator is on the right — USE IT!"
Advertisement:

Mustang is Stern's first pinball machine of 2014, celebrating the 50th anniversary of Ford Motor's Mustang line of cars. The playfield was designed by John Trudeau with Camilo Pardo, John Youssi, and Greg Freres behind the artwork; Lonnie Ropp, Tanio Klyce, Jack Benson, Mike Kyzivat, and Waison Cheng making the rules; and David Thiel and Mike Kyzivat responsible for the sound and music. George Gomez supervised the production of this pinball machine. This is the third pinball machine to have "Mustang" as its name.

The player is asked to pick a Mustang spanning from the classic 1965 convertible to the 2013 Boss 302. From that point on, there are three different types of objectives with this table: Upgrades of different classes to different parts of the car; completing a small collection of notable Mustangs each with its own mode; and the two multiball modes, Gears Multiball and Mustang Multiball. With a complete Mustang collection and fully-upgraded rides, the player can then advance to Silverball Stampede, the wizard mode featuring the (at the time) upcoming 2015 model.

A notable feature of Mustang is a 1/24 scale model, placed on a platform above the G-E-A-R-S drop targets. Replicas of various models from throughout the years are used for the pinball machine, the specific model randomly chosen. The Premium and Limited Edition machines also allow for easy substitution of any particular Mustang (or, if in an iconoclastic mood, a different brand of car) upon the platform. Another notable aspect of Mustang is that this is the first Stern table in a long time to have its own set of characters created specifically for the machine. This machine also introduces "multiball cancel," where you can choose to put off your multiball for later in exchange for more balls.

A digital version is available for Stern Pinball Arcade.