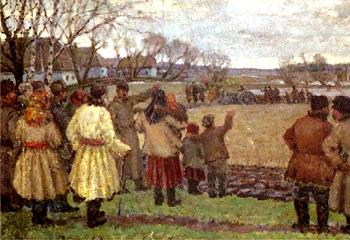 A style of art prevalent in the Soviet Union and the Eastern Bloc throughout most of their existence, but especially emphasized between The Soviet Twenties and the death of Joseph Stalin. At its height, it was the only official and acceptable style of poetry, architecture and essentially any other art (with the Culture Police ready to send you to the gulag if you disagreed). After the 50s, more artistic variation was allowed, although Socialist Realism remained the dominant style and was still heavily promoted.

Declared official Soviet state policy in 1932, its principles stated that every work of art should be created according to the ideals of Marxism-Leninism. The basic tenets in literature, film or poetry were:

If you want to create something different... you can't. No, really. The Party gives you money. The Party is responsible for promotion of your works. The Party knows where you live. If you create something in a different style, that's suspicious. You might be a class traitor. At the absolute bare minimum, your career will suffer and your work will be underfunded. If it's particularly experimental or abstract, it might never see the light of day. And if you're trying to embed some criticism of the government into it, then (in the Stalin era) you may be sent to a gulag where unfortunate tragic accidents happen every day (of course, such accidents can also happen in your home...). Or, in the post-Stalin era, you would be exiled to the other end of the country and forbidden to publish.

Not all Socialist Realist art was made in the Soviet Union. Quite a lot of it was made by communists living in other countries, even capitalist ones. It was almost exclusively aimed at consumption by the Soviet and East European public, but there was a notable Periphery Demographic that purchased these works. Perhaps the most well known of these foreign socialist realist authors was Nur Muhammad Taraki

who would later become President of Afghanistan after that country's communist "revolution" note A coup in all but name, and would be assassinated leading to the Soviet Invasion of Afghanistan.

The legacy of Socialist Realism is hotly debated, at least among people with an interest in such things. Surprisingly, it's not quite as split among political lines as one might think. There are some who call themselves capitalists who claim the genre had some merits,note As an "honest look" into the minds of working class people and there are those who call themselves communists who claim that the genre was the Soviet Union's greatest atrocity.note This viewpoint is especially common in Russia where literature is very much Serious Business. It turns out the whole "working class people won't like Surrealism/Fantasy" bit of Socialist Realist requirements was unfounded. The average Russian turns out to have a healthy appetite for both. Some argue that Socialist Realist literature got in the way of Russian literary progression, indeed a crime worthy of the most severe punishment in their minds.

Not to be confused with Social Realism, colloquially known as Kitchen Sink Drama, which is a closely related style but a very distinct genre. Many Social Realist artists were also socialists (though not necessarily Marxists), but the style is not necessarily political and certainly isn't part of any official Propaganda Machine when it is; if anything, it tends to be quite anti-Establishment.

To modern eyes, Socialist Realism sometimes seems to be bursting with Ho Yay. Though this is generally true of Eastern European and East Asian art, due to those cultures having very different ideas about what constitutes polite public displays of affection. The healthy dose of kitsch that all art from the period shares doesn't help though. Of course, it is not provable that the artists had no intention of Getting Crap Past the Radar. Homosexuality was decriminalized in 1918 in the Soviet Union but recriminalized by Stalin in 1933, remaining so until the Union's fall, although not in all of the Warsaw Pact states. Notably, not in East Germany which was actually very queer positive (and produced a LOT of explicitly queer positive propaganda, some of which can still be found) mainly because of the significant role that the queer community played in the Communist Party before the war. For example, this statue outside Prague's main rail station

Here is a Russian joke story about Socialist Realism and Soviet censorship.

A young writer brings his first story to a publishing agency. The editor reads the first phrase: "The count was rattling cuffs on a parquet". "What?" he says. "A story about some anti-Soviet count? Where is the working class? Remake it!"

A day later, the writer comes again. The first line now reads: "The count was rattling cuffs on a parquet, and down the street Vakula the blacksmith was forging some whatchamacallit". "Better," said the editor. "But I don't see the role of Communism."

Another day later, the writer brings another version of the story: "The count was rattling cuffs on a parquet, and down the street Vakula the blacksmith was forging some whatchamacallit and singing L'Internationale". "Much better!" said the editor. "The last thing to be added here is the bright future!"

And finally the writer brings the finished story. Its first line reads: "The count was rattling cuffs on a parquet, and down the street Vakula the blacksmith was forging some whatchamacallit and singing L'Internationale. 'Screw it!' said Vakula. 'I'll finish it tomorrow!'".

Here is another joke, existing in numerous variants:

There once lived a ruler, who was limping, hunchbacked and one eyed. He wanted people to remember him, so he decided to have an artist make his portrait.

The first artist came, and drew the ruler as he was. The ruler took a look, and said "I don't want people to remember me as a freak"! The artist was executed, and the painting was destroyed. This was the birth and death of Realism.

The next artist, having heard about what happened to his predecessor, drew a portrait of the ruler without his flaws. The ruler took a look and said "It's a good painting, but I want people to remember me, and this isn't me." The artist was executed, and the painting was destroyed. This was the birth and death of Romanticism.

The third artist asked the ruler to put on a cape, to hide his hump, mount a horse, to hide the limp, and drew him from the side of his remaining eye. The ruler liked the picture, and gave the artist two sacks of gold. This was the birth and the start of evolution of Socialist Realism.