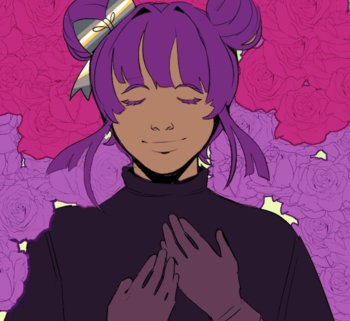 Who knew a planet-destroying cosmic weapon that can blink universes out of existence could be so cute?
"Life is a punishment. The world has no goal. You are God pretending that you are not, reliving the same life over and over and over and over again until you have gotten it right. You have the omnipotence to execute your will, to be whatever you want, but do not possess the might to immediately become nothing. Poor girl."
— Wren, (iii. i'm drowning here on solid ground / i'll step lightly lest I grow tired of the search for the cure for apathy, was it her?)
Advertisement:

is a Science Fantasy web serial novel written by Solange Salgado. On the surface, Division by Zero is about Kohana Outtaike, a 15-year-old, Afro-Asian girl note Kohana is nonbinary, demigender to be specific, but does not mind being referred to by feminine terms. from Earth who finds herself in the middle of a multiversal, eons-old cosmic war. What she thought would be a night of sneaking out, setting up shop in a tree, and stargazing at 4AM turned into a fight for her life against an Eldritch Abomination that goes around destroying planets for fun. She is guided through the battle by Hiroyuki D'Accardi, an alien from another universe who came looking for her, and is then told that she is both a cosmic weapon and his planet's military general. Things only escalate from there: the Earth is being invaded by Shadows, and Kohana is being hunted by Death.

Being a Magical Girl has never been so stressful, except that's the least of Kohana's worries.

Things escalate further under Division by Zero's surface. The multiverse Kohana must save is the rotting body of God. We are all accidents in the universe and our existence is totally arbitrary, having the same significance as bugs in a much grander struggle between cosmic forces that Kohana finds herself taking center-stage for.

There is a complete absence of a divine presence in the multiverse, and we are insignificant in the larger scheme of intergalactic existence. Perhaps we humans are just a small species projecting our own mental idolatries onto the vast cosmos, ever susceptible to being wiped from existence at any moment by some thing that could destroy the multiverse with no preparation, intent, or effort, with the same ease it takes for you to step on an ant.

In short, either Kohana wins, or the multiverse is fucked.

Kohana also happens to be partial to eggs.