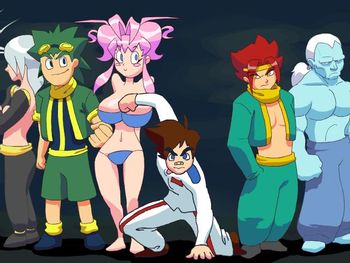 A bizarre series created by Egoraptor that massively parodies poorly animated and dubbed Shonen anime. It has three episodes and a fourth episode was planned, however, Egoraptor stated here

that the show is on permanent hiatus.

It follows the adventures of Kenstar and his True Companions on a vaguely defined quest to kill the Big Bad Galacticamaru.

Episode 1 can be seen here

WHAAAAAAAAT are these tropes?

THERE... is an index page OVER THERE!
Who cares about the stupid index you fools? We are not indexing works!
I AM!