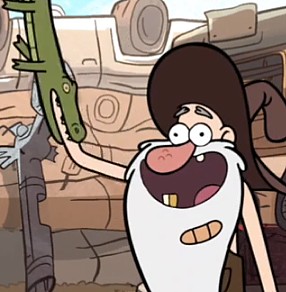 Be sure you wet that thing before you remove it.
"Why does my beard have a bandage? Does that even make sense? Why has no one pointed that out?"
— Fiddleford McGucket (pictured), Gravity Falls, "The Society of the Blind Eye"
Advertisement:

For some reason, Bob wears an adhesive bandage strip on his face, all the time. It's not because he cut himself shaving, or because he's just suffered some Amusing Injuries — in fact, he doesn't seem to be hurt at all. Apparently, the Band-Aid's only purpose is as an accessory to make his character design more visually interesting, or to make him easier to identify, or to make him look cool. Often shows up in animation, and is rarely commented on by the characters. In black and white comics, an easy way to avoid Color Contrast confusion is to have that character wear a bandage on say, their leg.