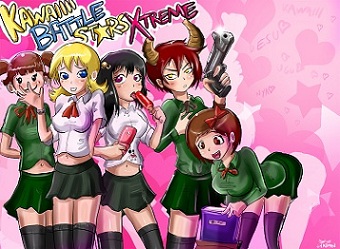 about a group of girls who fight evil using a star-shaped stone that is powered by their libido. Yes, you read that correctly. This series is meant to parody Magical Girl anime and the Shojo in general, as well as pretty much anything else they can make fun of. The first episode can be viewed here

Compare to Girlchan in Paradise!!, which parodies the Shōnen genre. However, unlike Girlchan, Kawaii Battle Stars tends to poke fun at the anime culture rather than anime itself.