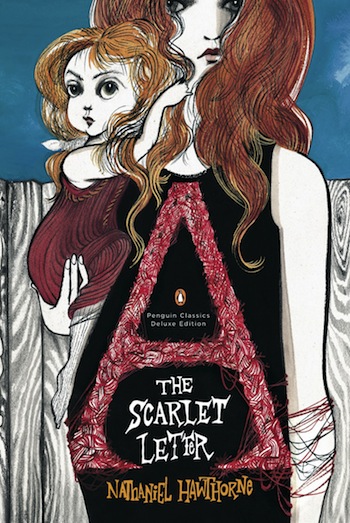 She had not known the weight until she felt the freedom.
Advertisement:

The Scarlet Letter is an 1850 romance written by 19th-century American author Nathaniel Hawthorne. Its adaptations include a 1926 silent movie and a 1995 film.

It's 17th-century Puritan Massachusetts. Life is difficult to eke out in a strange and hostile New World. Among a community that adheres to a strict faith, Hester Prynne, a young Englishwoman sent to the colonies ahead of her much older husband (whose whereabouts are unknown), has had a child out of wedlock. Released from prison two months after the shameful birth, she refuses to disclose the name of the child's father. As punishment, the Puritans sentence her to wear a scarlet letter A (for adulteress) on her breast, while standing on a scaffold in the town square for three hours. After the time is up, Hester continues to wear the scarlet letter and chooses to live a kind of hermetic existence on the fringe of the community, long after the rest of the townspeople have come to admire her and are prepared to welcome her back into the community.

Tormented by her own guilt far more than by any public shame, Hester raises Pearl, the child of her love affair. Throughout the book, we receive hints that Pearl may not be entirely human. Her demonic leanings do not go unnoticed by Hester, nor by the community at large.

On the day on which Hester receives her scarlet letter, another surprise appears: Roger Chillingworth, Hester's long-lost husband. Chillingworth arrives in the settlement and takes up residence with Arthur Dimmesdale, the local minister, and begins to prey on him.

So begins a series of dark transformations in a tale of guilt, remorse, and human weakness.

The book is widely considered an early classic of American literature.