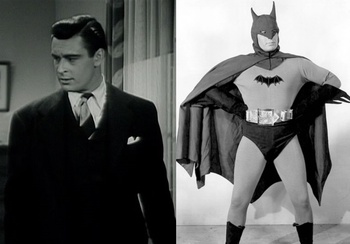 He was notable for being the first actor to play Bruce Wayne / Batman in live action, in the eponymous 15-episode 1943 film serial, at the age of 23.

A sequel to the serial was made in 1949, but Robert Lowery replaced Wilson as Bruce Wayne / Batman. Wilson's final film was Naked Alibi in 1954. Lewis then retired from acting and worked for General Foods.

His son is Michael Gregg Wilson, co-producer of the James Bond films at Eon Productions along with his half-sister Barbara Broccoli since 1995. Both of them are the children of his ex-wife Dana Natol, who later married producer Albert R. Broccoli.