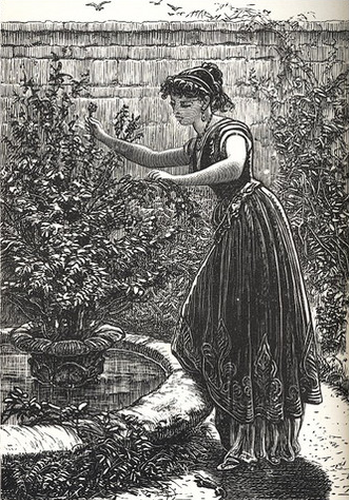 "The truth is, our worshipful Dr. Rappaccini has as much science as any member of the faculty—with perhaps one single exception—in Padua, or all Italy; but there are certain grave objections to his professional character."
—Professor Pietro Baglioni
Advertisement:

In 1844, Nathaniel Hawthorne published the Short Story "Rappaccini's Daughter" in the December issue of The United States Magazine and Democratic Review. It was republished in Mosses from an Old Manse, Hawthorne's short story collection, in 1846. A curiosity of the story is that the first two paragraphs have nothing to do with "Rappaccini's Daughter" and instead are used to discuss the fictional author M. de l'Aubépine, with "aubépine" being "hawthorn" in French.

Giovanni Guasconti comes from South Italy to Padua to attend its university, where Pietro Baglioni, a friend of Giovanni's father, works as a professor of medicine. Giovanni rents a room in Dame Lisabetta's house from which he has a rare view into the garden of Giacomo Rappaccini, a renowned doctor. Rappaccini's passion is poison and the garden is filled with plants Rappaccini cultivated himself. Of greater interest to Giovanni is the lovely Beatrice, the doctor's daughter. He ignores warnings from Baglioni to stay far away from the Rappaccini Household and a romance blossoms between him and Beatrice. Giovanni does notice that things tend to die around Beatrice and that she always maintains a distance from him, but he chalks it up to an overactive imagination until Baglioni outright tells him that Beatrice is highly poisonous. Incidentally, Giovanni's starting to emanate a strange odor too, so Baglioni gives him an antidote for the both of them. Giovanni confronts Beatrice about the deceit and she vows that she had no intention to or knowledge of any of it. She drinks Baglioni's antidote without hesitation, but rather than curing her it kills her because the poison is too much part of her.

As referenced within the text of "Rappaccini's Daughter", the main source of inspiration behind the tale are the poisonous female assassins of Indian legend: the visha kanya. The specific story referenced is the one written down by Robert Burton in The Anatomy of Melancholy.

As one of Hawthorne's most successful stories, it's been adapted to stage, opera, television and more multiple times. "Rappaccini's Daughter" also has a presence in modern pop culture in the form of the DC Comics villain Poison Ivy, whose character was based on both Rappaccinis. The Marvel Comics villain Monica Rappaccini similarly owes her existence to Hawthorne's story.

Tropes found in "Rappaccini's Daughter" include: