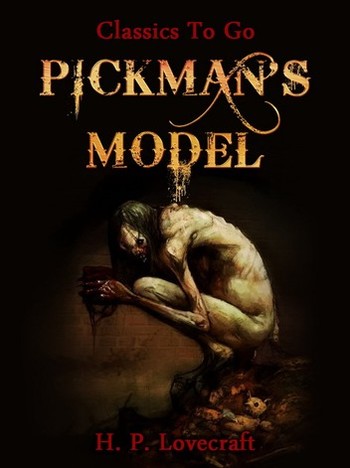 Pickman's Model is a short horror story by H. P. Lovecraft, first published in the October 1927 issue of Weird Tales. It introduces the ghoul creatures to the Cthulhu Mythos; Lovecraft's Dreamlands story The Dream-Quest of Unknown Kadath follows up on some of the questions and characters that appear in this story.

Lovecraft was fond of the Twist Ending for some of his shorter works, and the one for this story is generally thought to be one of his most potent, right up there with "The Outsider (1926)" because of the sheer punch of the very last line.

Boston painter Richard Upton Pickman has disappeared recently, and his former friend Thurber has a dark story to tell about him. Thurber regales Audience Surrogate Eliot about Pickman's strange artwork — portraits of monsters called ghouls, so lifelike and terrifying that no respectable gallery or museum would show them. Other artists cut ties with Pickman altogether. Only Thurber remained willing to associate with him, and the frightening artist soon offers to give Thurber a private showing of his work.

When Thurber ventures into Pickman's studio, he sees paintings more horrifying than anything Pickman had dared publickly show. When he and Pickman hear something crawling about on the other side of the door, Pickman shoots at it, blaming an infestation of rats.

Thurber had, just before this, plucked a piece of paper off an easel and pocketed it. When he looks at it later, he realizes to his horror... that it is, in fact, a photo that reveals Pickman isn't painting creatures from his imagination, but reality.

Pickman's Model was adapted into a segment of the anthology series Night Gallery, and then again by Alan Moore (with a few names changed) in Issue 7 of Providence.