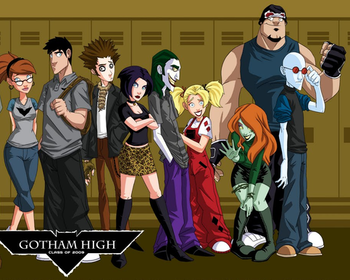 Barbara Gordon, Bruce Wayne, the Scarecrow, Selina Kyle, The Joker, Harley Quinn, Poison Ivy, Bane, and Mr. Freeze.note And starring Al Pennyworth as the Wise Janitor.
"The basic overarching plot is, 'What is the contrived nonsense that drives Cthulhu to take a human form and go to high school?'"
— The Nostalgia Chick pitches Viridian Saga
Advertisement:

The High School A.U. is an Alternate Universe Fic that may or may not resemble the original universe, but the main premise is that most or all of the characters from whatever universe the story draws from are all in an academic setting (typically set in the present day). Usually, this happens to be high school, although college is not unheard of, nor is Jr. High/Middle, or even Elementary School, depending on the ages of the cast.

This type of story may also occasionally remove anything and everything unusual in the original premise, though this is not necessarily a requirement. This especially tends to happen when the cast is already comprised mostly of teenagers in a fantasy or sci-fi world.

This is the most common form of Alternate Universe Fic, for good or ill, mostly because it is an easy setting to write for, probably because a lot of fanfic writers are of school age themselves. Some stories may take a series that never took place in a school and transplant the characters there. A variant on this is to take a series where a school was part of the setting, and makes it the primary setting. Another variant is taking a show with characters that were elementary or lower grammar school age and transplanting them to a high school setting. A less common variant are the characters being portrayed as teachers rather than students.

A rarer variation is to also attempt to transplant the storyline. This works better with storylines that are effectively independent of the setting.

This is especially likely to happen when the cast of a series functions as a Universal-Adaptor Cast.

Not a high school in Australia... unless it's set there, of course.