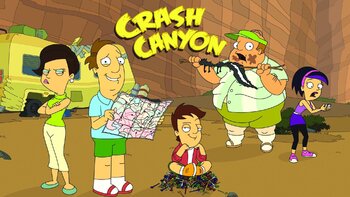 From left to right; Sheila, Norm, Jake, Vernon, Roxy.
How low can you go, well now you know!
—Series Intro

The show is about the Wendells, a dysfunctional family who, after an uneventful beginning to their vacation, end up plummeting into a two-mile deep canyon in Alberta. After coming out alive and unscathed, they realize they are not alone as the canyon is full of a small community of strange and quirky people who all have suffered the exact same fate. With little hope of escape, the Wendells decide to make the best of their new home... and maybe create the occasional escape plan here and there.

The show debuted on Teletoon at Night in September of 2011 and ended in March of 2013 after 2 seasons and 26 episodes. International broadcasting was handled by MTV, making it their third Teletoon-imported series after early 2000s cult hits Clone High and Undergrads.