Clawing at Own Throat 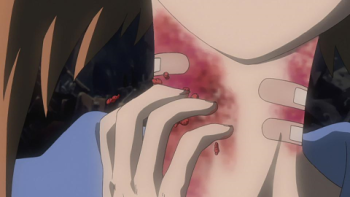 Human fingernails can be remarkably powerful. They assist grip, and protect the soft skin under them.

Unfortunately, they can also be turned into a tool for Self-Harm.

Scratching one's throat is often the result of Sanity Slippage and is often done in an absent minded way. The character scratching their throat may have an unfocused gaze or Hidden Eyes. Their voice may have dropped to a monotone level, if the character is still capable of talking after causing a lot of damage to their throat.

If the character is in serious danger of killing themselves, there will always be blood.

Clawing your throat would cause a lot of damage, but is a very slow method of suicide, so suicide by clawing the throat is not very common. Yandere characters often do this, but rarely end up dying from it. This trope is almost always played for drama, and is frequently a major source of Nightmare Fuel.

Lastly, it's not always played for self-harm: It's also a frequent reflex for characters that are strangled, especially telekinetically, or to try to save themselves from a hanging.

Shigaraki displays his habit of clawing at his own neck which he does when nervous or stressed.

Shigaraki displays his habit of clawing at his own neck which he does when nervous or stressed.