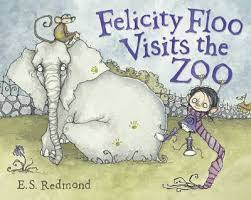 Felicity Floo Visits the Zoo is a children's book by E.S. Raymond. The book is in rhyme, with all of the rhymes ending in "-oo" sounds.

It begins with a zoo where all the animals are sick with what appears to be a respiratory illness and the zookeepers don't know why.

The narrator then explains that the reason the animals are sick is because a sick girl named Felicity Floo went to the zoo, ignored the "Don't Pet the Animals" signs, and petted the animals with snot on her hands, which is what got them sick.

The book ends with a message to go bowling and not to the zoo.