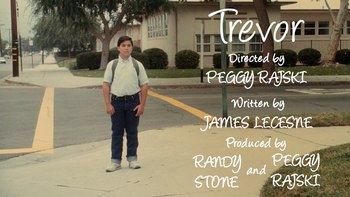 Trevor is a 1994 short film directed by Peggy Rajski.

Trevor is a boy in his early teens living somewhere in suburbia in 1981. Trevor's once-normal life starts to change when puberty hits and he begins figuring out that he's different from other boys. He likes ballet, the theater, and Diana Ross songs. He's not particularly interested in girls, but he really likes hanging out with his friend Pinky, who's a jock.

Trevor realizes that he's gay. When everyone else finds out that he's gay, Trevor is ostracized. Despairing, Trevor starts contemplating suicide.