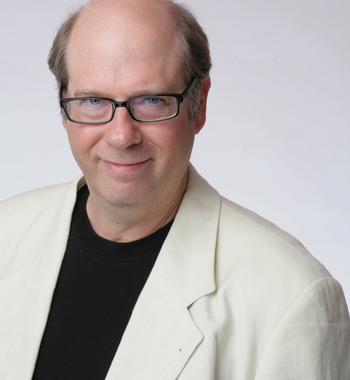 "The very best character actors are made of equal parts discipline and madness, and the fact that our faces are more familiar than our names is not our curse, but our blessing. The character actor's goal, after all, is not to earn the adulation of the public; it is to give lives to a hundred nameless spirits who make us laugh or cry, who are both familiar and new, who show us that their journey is our journey, and who, like everyone in the audience, never get to kiss Renée Zellweger."
—Stephen Tobolowsky
Advertisement:

Stephen Harold Tobolowsky (born May 30, 1951) is an incredibly prolific character actor, having appeared in over 200 movies and TV episodes. In fact, once in a hotel room he flipped through channels to find himself on every channel at various ages.

Stephen is perhaps best known for playing Ned Ryerson in the Bill Murray classic Groundhog Day. Although a versatile actor, he has a tendency to play jerks, incompetent villains, annoying suits or other Obstructive Bureaucrat types. In reality Stephen is a witty and affable fellow with a self-deprecating sense of humour.

He's also a highly gifted storyteller, and has a storytelling Podcast called The Tobolowsky Files

where he regales us with tales of life, love and the entertainment industry. These podcasts detail his emotional journeys through every aspect of Hollywood, while also recounting his personal relationships with friends, girlfriends, family and faith. They are often hilarious, heartwarming and tearjerking. You have been warned.

He is married to actress Ann Hearn and they have two children.